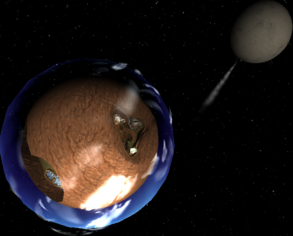 Timber Hearth and its Moon.

Timber Hearth is the home planet of the player's species. It has an entirely rocky composition, with no liquid water on its surface. The terrain varies little aside from large craters, one of which forms the area of the village. It has a satellite and one moon orbiting it. Sometimes, the Quantum Moon may appear to orbit Timber Hearth.

Timber Hearth is the starting world where the player initially spawns, and is the home of the Hearthians. Despite its many craters, only two of them have prominent features. One, The Village. The other; a [[