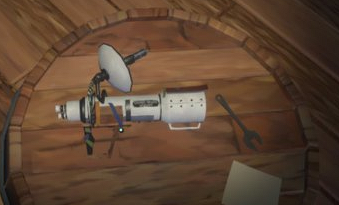 The Signalscope is one of the most useful instruments that come with the Hearthian utility belt. A mix of a telescope and a signal receiver, it has a flexible amplification capability, that can range from none to 7x, and an even better signal reception being able to listen to signals from any place in the solar system.

Coming out of the box with the Outer Wilds Ventures listening frequency it has the capability of pointing sources of it, naming them if discovered what is producing the waves and even learning new frequencies if close to the targeted source. Taking advantage of the telescope's increase it can go from a wider reception to a very specific, making it possible to pinpoint not only on which but where on the planet it is being broadcast. Another feature of the receiver is that waves of the same frequency can be superposed if detected in the same cone[1], as if the different sources were one.[2]

The known frequencies are : 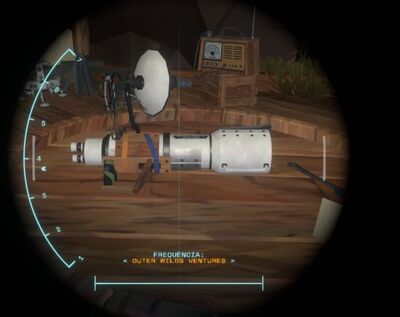 The telescope function has the aspect of making the signal receiver more focused to where it is aimed. When the telescope is used, it is impossible to walk or use the jetpack.

By using the learnForgetFrequencies cheat of TaiCheats, what appears to be an unused fifth frequency becomes available, White Hole. Its purpose is unknown and it does not seem to respond at any point in the game, even when being pointed at the eponymous spacial phenomenon.