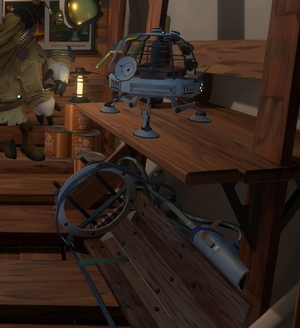 The scout with the Scout Launcher below it.

The Surveyor Probe Mk. IV, or Probe, often referred to as the Little Scout, is a launchable camera that was created by Slate to help safely explore hazardous environments. It has several abilities for exploring the Solar system : Forward and rear facing cameras for taking black-and-white images and detecting Ghost Matter, a distance indicator, a seismic stability indicator (only of use on Brittle Hollow), floodlights, a hazard indicator, and a warp core for recall to the player.

It can be launched from the spacesuit or from the ship with the right bumper on an Xbox gamepad or the right mouse button on a default PC keyboard and mouse setup.

The probe does not launch straight at the crosshairs while piloting the spaceship, instead, it launches slightly above and to the right.

The probe can be used to photograph the Quantum Moon, locking it into its current position, even if you look away (works the same way on the statue in the Observatory as well as other quantum objects). Can also be used to distract Anglerfish on the Dark Bramble, locate Ghost Matter, and check the seismic stability of the Brittle Hollow.