The Observatory is a museum and scientific research station located in the village on Timber Hearth. It contains many space-related objects. When starting the game for the first time, going inside is required for the launch codes. 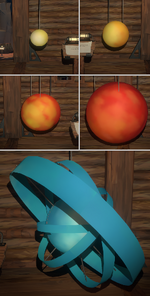 Models of the different phases of the sun

The musuem part of the Observatory contains the last intel the developers wanted to give to the player before they can finish the tutorial part of the game. That intel is given through the form of objects found by the Outer Wilds Ventures throughout the Solar System : a picture of the founding members of Outer Wilds Ventures minus Esker, a Nomai statue, a piece of wall from the Attlerock to show how to use the Translator, Nomai pottery, a Nomai skeleton, a Little Probe with its warp core, a gravity crystal to demonstrate wallwalking, a few pictures showing interesting part of the solar system, including an intact Orbital Probe Cannon, an emprisoned baby anglerfish, models showing off the life of a main sequence star to prepare the player to the supernova, a small garden with the Museum's Quantum Shard that teaches how to track them with a signalscope and that they're real creepy, and finally a flat pool with round balls that show off the Attlerock tidal effect and in consequence that the game simulates N body gravity.
The telescope room is a circular room at the top of the observatory that is able to rotate its wall around (not in game) to point its telescope in the right direction. It contains a wooden astronomical clock that can be used to open the solar system map at the center, the telescope and observational notes, and, in the first loop, the curator of the observatory and museum : Hornfels, whom gives the player the launch codes of the launch tower.

The observatory was home to a variety of items, such as a model probe, a baby anglerfish, an energy converter, space equipment, a monitor to see the view from the Sky Shutter satellite, and a mysterious phase shifting statue. There is also a map of the system in the telescope room, as well as various items and artifacts that show and describe pieces of the history of Timber Hearth.