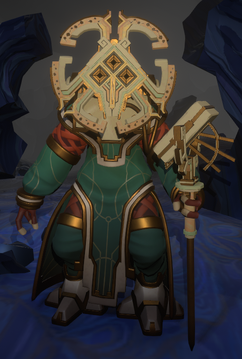 A Nomai dressed in a traditional life support apparatus.

The Nomai were a technologically advanced nomadic race which traveled to the Hearthian System after receiving a mysterious signal.

Nomai are tall, slender, digitigrade beings. They possess three eyes and triple-digit hands. They are covered in fur and their heads are adorned with two horns. They require oxygen to breathe. Nomai may have had tails, as several skeletons can be seen bearing one.

The Nomai race consisted of multiple clans. Each clan lived within a Nomai Vessel, a spaceship outfitted with an Advanced Warp Core that allowed the clan to explore the universe. The Nomai have an unquestionable aptitude for exploration and discovery. Every ten years, the Nomai clans would meet at a festival dedicated to celebrating their species' discoveries. Each clan sent an envoy to present their clan's discoveries since the last festival.

The Nomai have a strong preference for non-interference and a strong desire to protect lesser-evolved life forms. This is demonstrated by Idaea's argument against using the Sun Station to cause the local Sun to go supernova, as failure would result in the destruction of all life in the Solar System. The Nomai also showed extreme care when mining Timber Hearth for resources to construct the Ash Twin Project, taking precautions as to not disrupt the primitive life developing there.

The Nomai language is written in curving branches, with some branching text written by an entirely different individual. The Nomai write the text by 'typing' it in on a staff-like tool and pressing the opposite end onto a surface. The text is sometimes written on walls, read off of circular pillars or "records', seen as hovering discs displaying different statistics (such as departure-arrival times after a warp), or accessed by a scroll or tablet. One strange observation is that some text is written as if it was said in the moment (a good place to see this is the record inside the Interloper core). This could mean that either this is their only way of communicating, or that they have some sort of voice-to-text device.

The Nomai demonstrated a mastery of many highly technical and theoretical fields including faster-than-light travel, quantum mechanics, zero-G construction and time manipulation. They had the capacity to create and manipulate black holes, build spaceships, travel between galaxies, and at their peak could even send information back in time. Their mastery of these technological fields allowed them to construct massive machines that would be used to further their goal of locating the Eye of the Universe.

Nomai are frequently seen carrying a technologically advanced scepter, which allows them to record information on solid surfaces for written communication.

The Nomai appeared to have some degree of telekinetic ability as they possessed the ability move or manipulate objects with their mind. It is unknown if this ability occurs naturally in their species or is the result of advanced technology.

The Nomai are revealed to have traveled to the Solar System in search of the Eye of the Universe. When their Vessel was disabled, they initially settled on Ember Twin and Brittle Hollow, on which they built the Sunless City and Hanging City respectively, before expanding outwards to explore the rest of the Solar System. Their artifacts and structures can be found on all celestial bodies in the solar system.

Their ultimate goal remained to find the Eye of the Universe, despite the loss of their Vessel. When their initial Eye Signal Locator failed, they constructed much more sophisticated machines such as the Orbital Probe Cannon, Sun Station and Ash Twin Project in order to locate the Eye of the Universe. Their goal was to induce a supernova in the local Sun using the Sun Station, causing the Ash Twin Project to receive enough power to send information back in time by 22-minutes.

The Nomai, having recently learned of the failure of the Sun Station, discovered a mysterious comet that had just entered the Solar System and which they were eager to explore. The Nomai explorers were horrified when they learned the comet contained highly pressurized exotic matter, which was quickly becoming unstable as the comet approached the Sun. Before the Nomai explorers could warn their kin of the danger, the core of the comet ruptured, spewing deadly Ghost Matter across the Solar System, blanketing the system in an instant and killing all the Nomai who lived there.

Elsewhere in the Universe, the remaining Nomai clans became aware of the rapid pace at which stars in the Universe were going supernova and referred to it as the imminent death of the Universe. They began broadcasting a warning to every Nomai vessel and encouraged the surviving Nomai to travel to the Gloaming Galaxy, a galaxy whose stars were relatively stable compared to the rest of the Universe.