The Hourglass Twins are two binary planets orbiting each other. Ember Twin is mostly desert rock, and Ash Twin is almost entirely made of sand. One minute into the game, Ash Twin starts transferring sand to the rock planet.

The Hourglass Twins are the closest celestial bodies to the Sun (excluding The Interloper at its periapsis and the Sun Station). As they are relatively small planets, gravity is low compared to Timber Hearth, but not as low as The Interloper.

Ember Twin is primarily made of rock, with cacti and various rock formations on the surface. There is a cave system with multiple entries, which lead to and feature various Nomai structures and artworks. There is also a Nomai Landing Pod on the south side of the planet. As sand begins transferring to the planet after a minute, the caves & interior of the planet soon become inaccessible, preventing the player from entering the caves- or trapping them inside. Chert sits atop the north pole of the planet, playing their drums.

Ash Twin is initially filled with sand, however as the game progresses, the sand drains away revealing a Nomai Teleportation system. The player can be teleported to Brittle Hollow, Timber Hearth, Giant's Deep or the core of Ember Twin.

There are a few main sites: The Teleporter, the Probe Launchers, the Cryotube Pod, and the Sub-surface ruins.

The Teleporter is a relic buried under the sand that appears in regular intervals, seeming to rise out of the sand. After it has been fully uncovered it will teleport any players standing on it to another planet that has a similar construction. There are teleporters on Giant's Deep and Timber Hearth.

The Probe launchers are on the same planetoid as the Teleporter, and are fairly easy to notice. Other probe launchers can be found elsewhere.

The Cryotube Pod is one of three scattered around the solar system, each one holding dozens of empty pods. The one on the Hourglass Twins is located in a valley, and can be observed indirectly by its strobing green light. 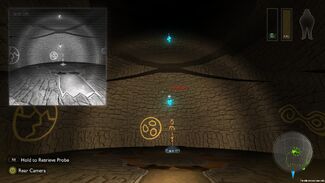 Near the Cryotube Pod is a hole in the ground, which leads to a series of caverns that are open to exploration, eventually you may come across several rooms, each holding different items. These are the Sub-surface ruins. There is another set of sub surface ruins located beneath the traveler. There is a hole in the ground, leading to several caverns. At the end of the tunnel/cavern bit there are a few two inscriptions talking about the anglerfish on Dark Bramble. They reveal how the anglerfish have very acute hearing, but poor eyesight, and also express that they wished they had known that when they arrived. Underneath the canyon with the arches, there are 2 caverns for each direction. In one direction there are ruins, the tower ruin leads to a cave that leads under the red spot that looks like a teleporter. it contains inscriptions about the four towers on the other twin, which teleport you to the planets indicated by the drawings on the walls when aligned.

The device that causes the time loop is located inside of Ash Twin. To access it you must wait for the sand levels to lower enough for the teleportation towers (It's the two that are very close together. They appear last) to appear. You will need to wait about 15 of the 20 minutes for the two towers to be revealed. Stand inside either of them and wait for Ember Twin to pass overhead. However, the sand column will try to pull you out of the tower so it is recommended that you stand under the lip of the tower so you can't be pulled out.

They orbit very close to the Sun, and thus it is not recommended to use the autopilot as there is a large chance that it will try to fly through it.

The Time Loop Device without sand in the way.
Retrieved from "https://outerwilds.fandom.com/wiki/Hourglass_Twins_(Alpha)?oldid=3959"
Categories: