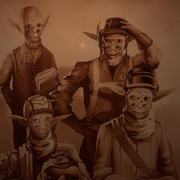 A group of Hearthians, the founders of Outer Wilds Ventures

Hearthians are a race native to Timber Hearth.

Hearthians are a bipedal race of blue skinned humanoids with four eyes and long ears. Their hands are composed of two fingers and a thumb. Despite their semi-aquatic nature, they are unable to breathe underwater.

Hearthian culture is genderless and places a strong emphasis on community and exploration. The Village is an extremely close-knit community and the only Hearthian settlement in the Solar System. Every member of the Village seemingly knows each other by name and young Hearthians are encouraged to interact with older Hearthians in their community.

Hearthian technology is very primitive despite their development of space travel. Hearthian structures are primarily made of wood loosely nailed together. All their tools for surviving space travel, including their ships and space suits, are extremely rugged, being held together largely with nails and tape. All their advanced technology, including the scout launcher and the ship's artificial gravity, is derived from Nomai technology.

Much of Hearthian history is largely unknown. Hearthians evolved from aquatic creatures that once lived within the flooded caves of Timber Hearth. While their species was too young to remember it at that point, prehistoric Hearthians were once visited by the mysterious Nomai following their arrival in the Solar System. The Nomai took extreme care when mining Timber Hearth for resources as to not disturb the Hearthian's ancient predecessors dwelling there. These creatures would later emerge from the water and over a long period of time would eventually evolve to become Hearthians.

The Hearthian race evolved at a point in time when the Universe was beginning to die. By the time they began to understand more about the Solar System, stars within the night sky began to slowly go Supernova. Eventually, the Hearthian's sun goes supernova, with the ensuing explosion encompassing the Solar System and killing every Hearthian. While their deaths were prevented for a time due to the Nomai's Ash Twin Project, the core was eventually removed and the project was disabled. Upon the final supernova of the sun, all Hearthians in the solar system are killed, and pushed to near extinction. The player then becomes the only Hearthian remaining, provided they actually warped with the Vessel.