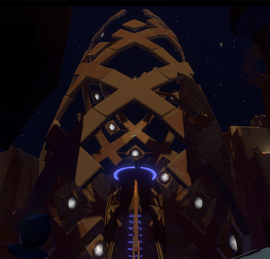 The Gravity Cannon with its shuttle recalled.

Gravity Cannons shoot Nomai shuttles using gravity and recall them using white/black holes teleportation. One is located on Brittle Hollow: it aims directly upwards. The other is on Ember Twin and fires at an angle. Both are still functioning, but there is little data as to what exactly they were meant to do, who built them, why they were built, or how the Nomai used them.

Since both cannons can be found on planets that the Nomai initially crash-landed on, it can be surmised that those early settlers might have built them as an early form of interplanetary travel--possibly even before warp technology was reinvented (with the recall warp feature being added in later)--to travel to new celestial bodies.

The shuttles that the cannons recall correspond to Nomai travelers who met with ill fates, and upon further inspection of how the ships operate, it can be seen that both ships lack any means of propulsion and therefore required the gravity cannons to launch.

The structural design and method of launch performed by the Orbital Probe Cannon appears to be similar to that of the gravity cannons, which shows that they could have served as an early precursor to that technology.

The Cannons only have two controls, located on a platform outside and under the firing platform. Triggering the right control will send a signal to the cannon's paired Shuttle to activate its Warp Core, which will recall the Shuttle to the gravity cannon. Triggering the left control will activate the gravity cannon, firing out the Shuttle if it is currently in the cannon. When activated, the cannon can launch other objects as well, such as the player's ship.

The player can recall shuttles from their resting places using the probe cannon ground controls. Once landed, the log devices inside the shuttle are easily accessed. The shuttle on The Interloper returns to Ember Twin, and the shuttle on the Quantum Moon returns to Brittle Hollow. Once a shuttle has been recalled, the player can fire the shuttles from inside (using the left path on the panel) and recall it (using the center path). The shuttle is very hard to aim and can only receive thrust once, from the Gravity Cannon. It can also be stopped (using the right path on the panel).