Eye of the Universe

The earliest mention of the Eye of the Universe comes from the Nomai of Escall's Vessel. Hundreds of thousands of years ago, the Vessel received a mysterious signal that was originating from an unknown source that appeared to be older than the Universe. Their curiosity piqued, they initiated an emergency warp to the source but ended up ensnared within Dark Bramble. After evacuating their Vessel and subsequently settling the Solar System, they named the source of this mysterious signal the Eye of the Universe and continued their search by building the Eye Signal Locator on The Attlerock. After the Eye Signal Locator failed to locate the Eye of the Universe, they began constructing much more sophisticated machines such as the Orbital Probe Cannon, Sun Station and Ash Twin Project in the hopes of inducing a supernova in the Sun to produce enough power to manipulate time to produce a time loop, effectively giving themselves infinite time to find the Eye of the Universe. The Sun Station ultimately failed to produce any significant effect on the Sun. Before the Nomai could find a suitable replacement, they were wiped out by the arrival of The Interloper in the Solar System.

While the Nomai never lived to see it, hundreds of thousands of years later the Sun reached the end of its natural lifespan and subsequently went supernova, powering the Ash Twin Project and activating the Nomai's ancient time manipulation technology. Thanks to the combined effort of the Orbital Probe Cannon and Ash Twin Project, the Eye of the Universe was swiftly located. However, there were no surviving Nomai left to act upon this knowledge.

The Eye of the Universe is in a distant orbit around the Solar System and is the farthest celestial body from the Sun, far outside the reach of the supernova. It cannot be found by conventional means and is unreachable until the player discovers the coordinates within the Probe Tracking Module at the core of Giant's Deep and is able to repair the Vessel's warp drive by removing the Advanced Warp Core powering the Ash Twin Project.

The Eye of the Universe appears to be a highly quantum object, being made of the same unknown Quantum material that the various Quantum Shards are made of, and is indirectly the source of all quantum shards within the Solar System. It features an incredibly powerful quantum storm funneling quantum energy into a quantum maelstrom at the south pole, which is capable of severing connection to the player's scout probe and preventing it from being recalled permanently. It also features a large crater at the South Pole. 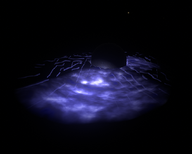 The Eye of the Universe as seen from The Vessel

Despite playing a pivotal role in the story, the true age, nature, or purpose of the Eye of the Universe is never revealed (although the Nomai believed it to be older than the universe itself). Information pertaining to the Eye of the Universe is mainly in the form of Nomai Speculation discovered from ancient ruins as well as information inferred from the Quantum Moon at the Sixth Location (in orbit around the Eye of the Universe). Both ancient Nomai cities, The Hanging City and Sunless City, on Brittle Hollow and Ember Twin respectively, feature shrines dedicated to understanding the Eye of the Universe and the philosophical implications of such an object existing. The Nomai speculated as to whether The Eye of the Universe could be conscious or malicious. They also wondered if it truly called out to them or perhaps they misunderstood the signal. When she was a child, the Nomai Solanum believed the Eye was a malicious entity which tricked her clan into coming to the Solar System to intentionally maroon them.