Difference between revisions of "Escape Pods" 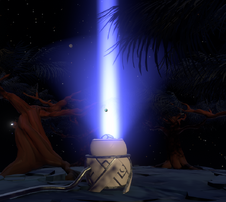 An Escape Pod Beacon which emits the signal you can find via signalscope.

Escape Pods are ancient Nomai ships that have landed all around the galaxy. They originate from a larger Nomai Vessel lost within Dark Bramble. They share similar designs and interiors, a computer, a rear facing entrance (where the ship was attached), and an emergency hatch in the front. The are also large blue cylinders within the glass walls inside (which may have been safe seating for the Nomai).

You can find them all via signal scope, but with all new signals you must find one first.

Escape Pod 1 is on Brittle Hollow. The survivors created the Old Settlement, The Hanging City, Tower of Quantum Knowledge, and the Gravity Cannon

Escape Pod 2 is on the Ember Twin. The survivors created the Sunless City and the Gravity Cannon.

Escape Pod 3 is on Dark Bramble.