There are several different endings to Outer Wilds. Some of them can only be accomplished by exploring and learning as much as possible about the history of the Solar System, and others are cleverly hidden and must be discovered. 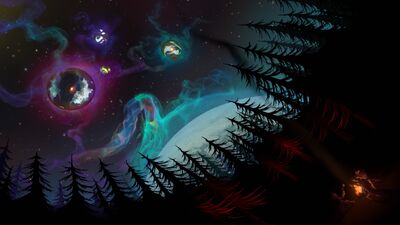 The Eye of the Universe ending is the intended ending of the game and is achieved by removing the Advanced Warp Core from the Ash Twin Project and transporting it to the Vessel. After inserting the Advanced Warp Core in the housing unit, a console will rise from the floor where the player must input the coordinates retrieved from the Probe Tracking Module. After successfully entering the coordinates and sliding the light orb up, the Vessel will warp to the Eye of the Universe.

Once on the Eye of the Universe, the player will walk from the North to the South pole, passing through a major quantum storm and encountering numerous quantum objects. The player will eventually come to a large crater with a large amount of quantum mass flowing upwards. Jumping into it, the player will fall for a long time and see several quantum anomalies before suddenly being transported to a quantum version of the Observatory. All the notes on the various exhibits have been changed to reflect discoveries the player has made and events that have passed. Once the player reaches the upper level and interacts with the display, they are transported to a forest known as the Ancient Glade.

The player will then have to make a campfire and find Feldspar, Gabbro, Riebeck, Esker, Chert, and Solanum (if she was found on the Quantum Moon) with their signalscope. After finding all of the travellers, talking with each of them and asking them to play will cause them to start playing their respective instruments. When all are playing a blue ball will begin expanding above the campfire. After all of them have played for a short time the music will stop, the campfire will extinguish, and the ball will stop growing.

Entering the ball will transport the player to an empty region of space. Immediately afterwards, a new Universe will explode into existence in an event reminiscent of the Big Bang. The explosion will race towards the player before engulfing them in a blinding light. The game then ends with credits with a post-credits cutscene afterwards.

The post-credit cutscene occurs 14.3 Billion years after the events of the ending. The new universe fades in while the camera pans down to a newly forming solar system before showing a surface view of one of the newly formed unidentified planets.

The post-credit cutscene varies slightly depending on what was accomplished during the playthrough.

The Game Over ending is achieved by dying while the player is not connected with the Ash Twin Project through the Nomai mask.

The most common way to receive this ending is from dying at the start of the game before the player is able to link with the Nomai statue upon leaving the Observatory. Common ways this can occur are: jumping in the campfire, fall/collision damage, walking into the ghost matter field, or jumping into a geyser and drowning. If the player dies before linking with the Nomai statue, the game effectively restarts.

The Isolation ending is caused by removing the Advanced Warp Core from the Ash Twin Project and flying far enough away from the Sun as to not be affected by the supernova. A short time after the Supernova ends, the screen will fade to black, stating the player and their ship will drift through space until the ship’s supplies are depleted. Despite this ending being intended to be permanent, the player can resume their save and continue from their previous loop.

The Quantum Moon ending is caused by removing the Advanced Warp Core from the Ash Twin Project and landing on the Quantum Moon and travelling to its sixth location. After the supernova occurs, the screen will fade to black stating the player has lost track of time and their journey has reached its end, with the player sharing the same fate as Solanum. Despite this ending being intended to be permanent, the player can resume their save and continue from their previous loop.

The Breaking Spacetime ending is achieved by breaking the fabric of reality.
The most common way this can occur is in the High Energy Lab on Ember Twin. If the player inserts a white hole and black hole into the device and fires a probe into the black hole, the probe will exit the white hole shortly before entering the black hole. If the black hole is removed from the console before the probe enters the black hole but after it has exited the white hole, two probes will exist simultaneously and begin giving an "Error: Duplicate Signal" message. Shortly after, the screen will begin tearing before being engulfed in darkness, stating the player has broken the fabric of Spacetime. Despite this ending being intended to be permanent, the player can resume their save and continue as if they had only just died in the loop where they broke Spacetime.
It is also possible to break spacetime with the Self Ending.

In all variations of this ending, the traditional credit scroll is played extremely quickly with humorous edits and accompanied by a kazoo-cover of the main theme and the player will be granted the Achievement You've met a terrible fate.

The Self Ending is a variation of the Breaking Spacetime ending, added in Patch 1.0.4. As of this patch, it is possible to jump into the black hole in the core of Ash Twin that opens as the sun goes supernova and cause a paradox. The loop will end and the Protagonist will wake up at their campfire as usual. During this loop, there will be two "You Are Here" markers on the Solar System map, with one of them still inside the Ash Twin Project. There, a copy of the Protagonist can be found, an NPC named Self, near the script wall, having been carried back through time alongside their memories.

After getting over the initial shock of the situation, Self wonders what will happen if their past self (the Protagonist) does not jump through the black hole and close the causal loop that has been created. If the black hole is jumped through, the loop starts over as it did the first time, but with new dialogue from Self (this being a new Self, the Protagonist from the last loop). If the black hole is not jumped through, then Self cannot exist, because they are in the Ash Twin Project due to the Protagonist jumping in the black hole. Since the cause of Self's existence was removed, a paradox is created where Self has no point of origin, causing the breaking spacetime ending to occur. The save is then reset to the beginning of the first loop where the black hole was entered, undoing the paradox. This ending happens whether or not Self has been met.

Sending a Scout through the black hole is also possible and will also trigger this ending.