Difference between revisions of "Death" 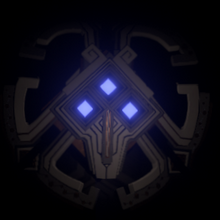 The Mask seen after every death

Death is inevitable in Outer Wilds. When the player dies, images of their last life flash before their eyes, from their death to the start of them waking up in the Village, where they then respawn.

The player is almost always bound to die at the latest 22 minutes after waking up, as the supernova explodes. The supernova may be outrun by flying far enough from the inner solar system, which technically allows the player to survive, but this will not prevent their memories from being sent back in time and thus the start of a new loop. Most of the time, the player will die before that, as the exploration of the solar system can result in many unplanned deaths through various means.
Dying less than 60 seconds after waking up grants an Achievement.

If the player dies being fried by the sun, either because it went supernova or from falling into it, they will start the next loop looking at the campfire, otherwise it will always be looking at the explosion on Giant's Deep. After a violent death the player starts the next loop with one short and shocked breath, if the death is considered chill (meditation or supernova), the first breath will be relaxed. If the death is due to suffocation, the first breath will be a longer gasp.