Brittle Hollow is one of the most fascinating and dangerous planets in the solar system. The crust steadily collapses over the course of 20 minutes due to fireballs coming from its moon, the Devil's Furnace, impacting it. See the "Hazard Mitigation" section for more details. Again, this is home to many artifacts of interest, listed and detailed in the "Relics" section. In the center of the planet, there is a wormhole, along with a traveler who can be found under the crust. 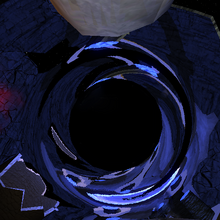 The black hole at the center of Brittle Hollow.

The most prominent structure on the surface of the planet is a huge dome. This was used as a tornado research facility by the aliens. Access to this is hard to get, requiring you to fly under the crust and then up into it from below. Secondly, there is the Hanging City, a large collection of ruins suspended underneath the crust. Here can be found a large wall painting showing the arrival and fate of the aliens. To get to the hanging city, land in the crater with smoke emerging from it, then head through the open rock face, and then towards the light and ruins. Beware of falling crust, and the platforms may be at risk as well. Along the way you will find the traveler, who mentions his studies leading him to the Hanging City. Lastly, the wormhole at the center leads to an area far from the sun, just outside of Dark Bramble's orbit path, where a large chunk of ancient alien technology is found, presumed to have been sucked through the wormhole a long time ago after originally residing at the center of Brittle Hollow, and occasionally emitting a blue flame. This is known as the Deep Space Teleporter (Alpha), and could indicate that it is a portal through which the aliens first arrived. If you jetpack inside the broken tower (without your ship) of this structure and wait a minute or two for it to align properly and emit the blue flame, you will be teleported back to Brittle Hollow, directly above the banjo-playing traveler.

Caution: If you try to enter the tower chunk at the exit-point wormhole with your ship, it is highly likely you will alter the spin trajectory of the object, thus ruining it's pattern, preventing it from lining up with Brittle Hollow, and never firing the blue flame that teleports you back in player form.

The crust is weak, but thankfully the probe will help you. Fire it at a piece of rock, and it will give you its structural integrity underneath the label as a percentage. Each piece of crust can be hit twice by the balls of lava from Devil's Furnace - any further impacts will cause a collapse. This means a probe reading of 100% is relatively safe, a reading of 50% means you should hurry up and watch the skies, and a reading of 0% means the block of crust is in the process of collapse - watch your head.

Some areas of Brittle Hollow are immune to the bombardment and will not collapse no matter how many balls of lava strike them. The block of crust above the Hanging City, for example, cannot take damage. These areas can be distinguished from vulnerable areas either by their texture, or by firing a probe at them - immune areas will not display a crust integrity value. Be sure that the probe is latched onto the crust - structures will not display the structural integrity of the pieces of crust linked to them.