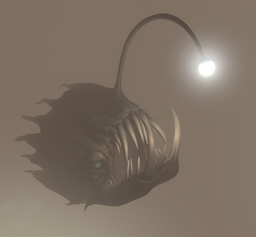 Anglerfish are large hostile creatures that can be found within Dark Bramble.

Anglerfish are much larger than the player's ship and pose a serious risk to exploring Dark Bramble. Their bio-luminescent lure strikingly resembles the glow of the portals within Dark Bramble and can easily be mistaken for one. When alerted they can move faster than the player's ship and are capable of swallowing it, instantly leading to certain death.

There are many anglerfish throughout Dark Bramble. Most rooms within Dark Bramble feature at least one, however some can have more. Feldspar's Node and the Vessel node are the only areas not to feature Anglerfish. The largest concentration of them can be found in the Nest Node (distinguished by its red glow) which features five Anglerfish, three of which are guarding the entrance.

As revealed from the Anglerfish Fossil within Ember Twin, Anglerfish are blind and hunt using sound. The player can freely pass as close as they wish and as fast as they wish, as long as they are not making any sound when doing so. Rotational thrusters will not alert them but directional thrusters will. The scout cannon will also alert them if fired within proximity to them however probe impacts will not.

Anglerfish will release an audible growl when they detect movement and will move to investigate the source of the sound. If the player makes further noise during this state, the Anglerfish will roar loudly and begin pursuing the player. If nothing is detected they will go back to their idle state.

Anglerfish have a slower acceleration but faster top speed than the player's ship. This means the player can escape if they react fast enough. Branches within Dark Bramble can also be used to the player's advantage. By weaving between branches, any pursing Anglerfish are likely to get stuck on the branches due to their larger size. Anglerfish will go back to their idle state if the player manages to create enough distance between them.

Players may find inconsistent solutions to getting past Anglerfish, but given that when travelling through a Dark Bramble node, the player always comes out travelling in a specific at a set speed (regardless of the angle and speed they enter at), the most consistent tactic is just to drift until you are a safe distance away, not thrusting at all (and thus perfectly safe). This strategy is perfectly consistent and may help ease frustration.